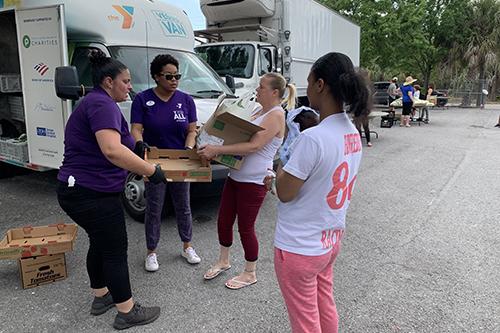 The Tampa YMCA’s Veggie Van - A Mobile Market Place is doing its part to serve the community even more during this time of need. “There’s a need to feed people so we wanted to respond any way we could to meet that need,” says Lauren Reyes, Tampa YMCA Vice President of Operations.

The Tampa Metropolitan Area YMCA’s Veggie Van added an extra Sulphur Springs stop for one day last month, thanks in partnership with One More Child. “We know this is a food desert, so there’s not a lot of access to food. It’s very low income,” says Meagan Smithyman, Sulphur Springs YMCA and K-8 Community School Director. “We’ve already received lots of feedback from our families that we have parents losing jobs and they’re concerned about where their food is going to come from next week.”

Pre-packaged produce bags of fresh produce, daily meals, chocolate milk, infant and other personal hygiene items were distributed to the community at no cost. “It’s helping me a lot. I’ve got fresh tomatoes and salad,” says Sulphur Springs resident Cheryl, who towed her groceries in a wagon alongside her two young grandchildren. “That’s less food I have to cook and we can keep our other food frozen for a while or as long as we’re stuck at home.”

The Veggie Van is also changing its Pasco County’s Lacoochee stop to weekly, thanks to donated emergency funds from founding partner United Way of Pasco County. “When the Veggie Van saw the need in the community, we stepped in and out of our traditional delivery schedule to try and help the families on a weekly basis,” says Mobile Food Market Director Elizabeth Roman.

The Veggie Van is able to feed even more families at its regular stops, thanks in part to a weekly donation from Feeding Tampa Bay, in addition to its generous year-round supporters. Both Caspers Company and Humana also donated 1,150 reusable bags for the prepackaged “grab-and-go” produce. The Y is grateful to our current and new partners who are stepping up during to help during this health crisis. If you’d like any more information, please contact Lauren.Reyes@tampaymca.org.