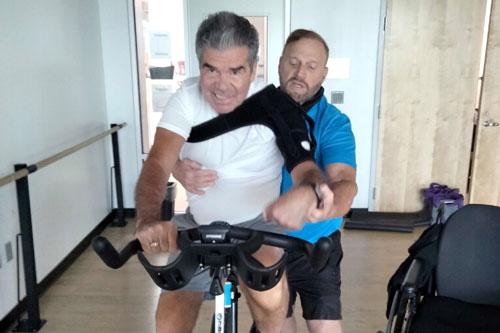 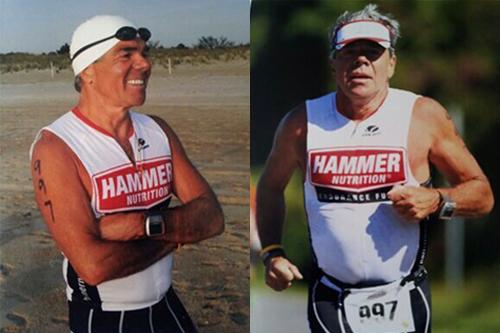 Ell was a triathlete and jokes he was the original gym rat before his stroke. His goal is to compete again someday.

A week before Ellsworth ‘Ell’ Clinton Buell suffered a massive stroke two years ago, he was a triathlete, competing for more than a decade.

“I ran across the Skyway Bridge a week before I had the stroke- a 10K race,” Ell says.

“The weekend before the stroke he had the best time ever on a 5K,” adds his wife of 35 years, Lalia.

It’s what Ell and Bart Guida, his personal trainer at the Spurlino Family YMCA, credit for saving his life. He was also a Spurlino Y member prior to the life-changing event which physically affected the whole left side of his body.

“I find that true; that being he had the experience of the Y prior and being so athletic that I can ask of him what I need to ask and every effort is 100 percent,” says Bart. “He’s very motivated to do what he needs to do.”

“He has been making great progress,” says Bart. “In our walking in the studio, we’re up to four laps around the studio with a cane. He’s up to getting out of the wheelchair, using to get in here and get around quicker to maximize his time but when he’s here he walks with a cane generally.”

Bart says they’re focusing on bringing the mind, muscle connection back for Ell on the left side. They’re also using the therapy pool.

“The pool has been very helpful being bouyent,” Bart says. “We’re trying to walk across the pool or part of the pool without holding him at his waist but not even holding him. So, it’s working.”

Ell’s wife agrees, explaining they needed something else in conjunction with physical therapy.

Bart says he’s also working on the machines with Ell.

“It’s working with weight. And we’ve seen tremendous progress on the left side,” he says. “We are doing his triceps and biceps & shoulders.”

Ell is happy to be back at the Y, where he used to come every day at noon prior to the stroke.

“Coming here is a big high to me. I get my motivation here and at home,” Elle says. “Bart’s a very good person and he puts me through the ringer when I work out and I feel good when I leave.”

“It makes my weekend,” says Bart.

Ell’s goals by the end of the year include running again.

“It’s interesting because in the studio the tempo and speed that he starts to possess is one of a runner. His stride is bigger. I have to tell him shorter steps because he’s making long strides. It’s almost as if his body is saying he wants to run,” Bart says.

Ell’s ultimate goal? To get back to competing in triathlons of course.

“Swim, bike and run,” he says. “I can’t wait to throw this thing away,” looking down at his wheelchair.

Personal Training at the Y can help you with any goals you may have–whether that’s gaining your independence back following a medical crisis or breaking out of a fitness plateau and learning fun, challenging exercises that keep you motivated.