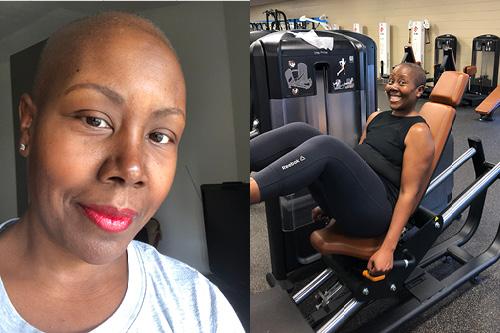 Terika Sparks-Parris is a LIVESTRONG® at the YMCA coach who was diagnosed with breast cancer.

Terika Sparks-Parris went from coaching cancer survivors in the LIVESTRONG® at the YMCA to joining the class as a member.

“It was a very interesting journey; one that set me up for success,” says Terika, who met breast cancer survivors while being involved with cancer charities as well as coaching LIVESTRONG and group fitness classes at the North Brandon Family YMCA. Because of this, she handled the bad news well. “I know that sounds weird because when I got my cancer diagnosis I didn’t go through that ‘why me’ type of phase.”

Terika was diagnosed with stage one breast cancer through a routine mammogram, but she says it was aggressive and invasive. Wanting to avoid radiation, Terika says she went the extreme route and opted for a double mastectomy and four rounds of chemotherapy, which had side effects like neuropathy (nerve damage often causing weakness and numbness of the limbs) and brain fog.

So, Terika joined an Enhance®Fitness class, which is a fall prevention program at the YMCA. “I couldn’t feel my feet,” explains Terika. She then joined the LIVESTRONG® at the YMCA program. She says it was her support system that got her through her diagnosis.

“Getting to know the members and getting close to them and understanding their stories it kind of set the stage for when I got my cancer diagnosis. I automatically knew that I’d have a support system. Having a support system is probably 90 percent of survivorship, having people in your corner, especially people who can understand what you’re going through as far as having these treatments and getting poked…what feels like every day. Going through all these tests and the surgeries, the forgetfulness, the neuropathy. So, I can say I forgot where I parked my car and we can all laugh — “been there” things like that so I kind of feel like I had the cliff notes to surviving cancer just because since 2008 I’ve been involved with cancer survivors.”

Breast cancer didn’t run in her family. “I was one of those anomalies. I had no genetic disposition. I even took the BRCA gene (Breast Cancer) test. It’s not in my genes. I’ve never lived in hot spots (a cancer cluster in a community). I didn’t have any of those conditions that getting cancer was pretty high, so it was a shock. Even the doctors they just can’t explain why someone with my background developed breast cancer.”

Terika is still a coach and graduated the LIVESTRONG program earlier this month. She’s now in remission but needs CAT scans and blood work twice a year until she’s further from her remission date.

“I wish more doctors could advocate for the program,” she says of the LIVESTRONG® at the Y program. “You’re thinking about everything a person goes through surviving cancer. There’s nothing that can prepare you for the news of you have cancer.”

LIVESTRONG® at the YMCA is a free, 12-week program that offers support, guidance and personal training from certified cancer wellness coaches. The program focuses on physical and social activities for patients before, during and after cancer treatment. Learn more about the program.