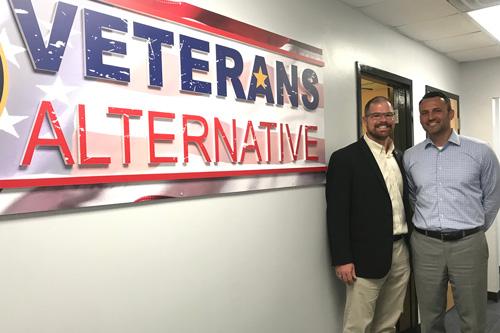 Did you know Florida has earned a reputation as the most veteran-friendly state in the nation? With more than 1.5 million veterans living here, the Sunshine State has the third largest population of veterans in the country. Moreover, Tampa Bay has turned into a major destination for vets with the prominence of MacDill Air Force Base and the James A. Haley Veterans Hospital (VA).   The Tampa YMCA is committed to bettering the lives of local veterans. In addition to working directly with the VA to provide programming and services to veterans, the Y also partners with Veterans Alternative, a non-profit providing alternative treatment options for veterans.   Veterans Alternative provides wellness programs for combat veterans and their spouses - at no cost to them. Among the alternative therapy options is Accelerated Resolution Therapy (ART). ART helps reprogram the way veterans store traumatic memories, changing how they react to those memories. “These are the therapies that really did save my life coming home,” says Veterans Alternative founder and Former Green Beret Brian Anderson. “We save a lot of warriors’ lives. We had about 400 warriors go through the weeklong program in three years. And we’ve proven it as a valuable program that should be replicated and multiplied in other areas.”   In partnership with the Tampa YMCA, Veterans Alternative rents complimentary space in Tampa. The recent expansion comes after huge success in Pasco County. Veterans Alternative’s Accelerated Wellness Program participants show a 46 percent reduction in PTSD; 61 percent in depression; and 56 percent in anxiety.   During ART, veterans follow the hand of the counselor with their eyes and they think about a traumatic experience. Then, the therapist guides them to think of a positive experience and replace it with the negative one. Other sessions include yoga, equine therapy, art & music therapy and strength & conditioning training.   One recent participant writes, “Before I came to Veterans Alternative I was ready to drive my truck northbound in the south bound lane on I-65. I'm not giving lip service here - your staff and your organization literally saved my life. I am happier than I've ever been or even knew existed. My marriage to my amazing wife is better than it's ever been. My two boys are happier and want to spend time with me now. Thank you for giving me the support, guidance and tools to overcome my demons. I am not the same man I was before I attended.”   Feedback like this is why there’s a waiting list for Veterans Alternative. It’s also why Veterans Alternative is thankful for the partnership with the Y. “I can see where this partnership with the Y is going to be a huge benefit because we do the counseling portion, we do the yoga portion and you have all these other portions that are involved with people connecting to the community,” shares Brian. “This relationship just puts us in a different stratosphere so we are extremely thankful.”   Tampa Y President & CEO Matt Mitchell agrees while touring the nonprofit’s new site off Palm and Florida Avenues, “This is just a building with four walls and some doors but the Veterans Alternative is putting some life into it.”   Brian is encouraged by a new state bill that will cover alternative therapies under Veterans Benefits. Florida is now the first state in the country to cover ART treatments for veterans. “Veterans Alternative and others have worked for three years on this bill and we got it passed this year,” explains Brian. “Now, Veterans Alternative is taking the lead on rolling this out throughout the state with 15 organizations participating. It’s extraordinarily exciting.”   Veterans Alternative is also working with YMCA Camp Cristina for future programming. The Y is honored to do its part to improve the quality of life for heroes who sacrifice so much for our country. For more information on the Veterans Alternative, click here.   Pictured above: Former Green Beret Brian Anderson (L) works with Tampa Y President & CEO Matt Mitchell to treat more veterans with alternative treatments.